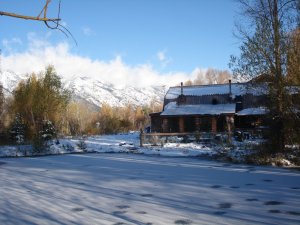 The first winter snows have already arrived and we will see more fresh snow this weekend. The pond is beginning to freeze, a metaphor for the world economy.Icelandreview.com carried a recent survey that said 50% of Icelanders age 18-24 would consider emigrating compared to 33% aged 18-75 . These are stunning numbers especially when you consider that just a few years back Icelanders were considered among the planet’s most wealthy and fortunate, at least on a per capita income level. Iceland must be suffering. But consider her neighbor Sweden especially if you are a Volvo Truck AG employee.In the 3rd quarter of 2007 Volvo trucks for export to Europe totaled 41,970. The 3rd quarter 2008 figures recently released total……..are you ready for this…..?…155!!. That is not a misprint. Here is the link:
http://www.scoopit.co.nz/story.php?title=VOLVO_Truck_orders_decline_99-63_in_08-1.
Any you thought only US car makers were in trouble. More evidence comes from the Baltic Dry Shipping Index, which is a measure of world shipping costs. It is down 90% year to date which means it is 90% cheaper to ship cargo on the world’s oceans now than it was on Jan 1st of this year. I have posted the apocalyptic news about the credit collapse in Eastern Europe and the news continues to be even bleaker. Even Italy which somehow escaped the toxic waste of US Subprime is sinking on world credit markets as the government is finding it harder to peddle its bonds compared to comparable Eurobonds. Italy has had to price its bonds 108 basis points(1.08%) higher to unload them.
Back in the US, Paulson’s shameful and shameless bailout of garbage is picking up speed. More money is flowing to AIG and the 9 big banks who are going forward with enormous bonus plans for their executives and plans to buy out weaker rivals with our taxpayer money.That first bailout sure worked good. In the first 9 months of this year $108 billion was set aside for bonuses by those banks and Paulson just gave them $125 Billion. Whew! Just in the nick of time for Christmas. What will it take to get the attention of these clueless crooks? Mobs with torches and pitchforks marching on the Hamptons? With the exception of a few watchful congressmen like Henry Waxman, nothing is being done. My final item will get your attention if you are one of those sub prime or alt A borrowers. On the books is a proposal to offer lower interest fixed government mortgages but the bankers have slipped in one slight catch. If you take the bait you are offered the mortgage as a recourse loan. The mortgage is now not secured by the house as collateral but by the immortal soul of the borrower. If the borrower loses his job or health and defaults, he will owe that money for the rest of his days!! No one but no one should ever accept such an offer from these Faustian bankers. I would urge all voters in this country to vote their representatives out of office if they voted for TARP. My Wyoming senators voted against it and so it appears I will be voting Republican this year.