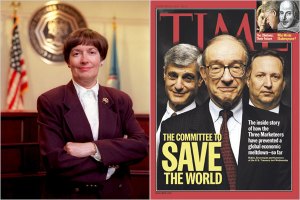 If you don’t know these women by now, you should! That is Professor and author Elizabeth Warren of Harvard to the left who is overseeing the TARP program and who has been increasingly vocal demanding accountability from the wall street bankers who have probably caused the next great depression. The woman above is Brooksley Born who ran the CFTC in the late 90’s and who is now famous for questioning the morons to her left about the risk of the then new financial derivatives. Now we know that she was right and they were stupid. Old Larry Summers even questioned the female brain’s limited ability to understand math and science. He was fired from Harvard for those remarks but thinks worked out for him as he went over to the $33 Billion Wall Street hedge firm DE Shaw on for a much better salary(millions). As for Brooksley, well let’s just say that they did not appreciate her remarks and they proceeded to shun her and run her out of the beltway on a rail. The reason I mention these fine women is that I had a friend ask me recently who I would replace the current unindicted economic co conspirators in Barak’s economic cabinet if not with more corrupt minions from GS, JPM and Citi. The problems we have were caused by these Wall Street financial miscreants and the problems will not be fixed by them. These two women, BB and EW popped immediately into my head as women who were knowledgeable in economics, law and government and uncorrupted by same. And so it got me to thinking about why is it that all these greedy financial weapons of mass depression have been men? And as Michael Lewis in the April Vanity Fair article”Wall Street on the Tundra” pointed out, the main political party in Iceland was virtually 100% male as were all the perps in that poor country’s financial meltdown.So my modest proposal is that as a country we should make sure that women are involved in decision making at the highest levels in government and finance. It is possible they could make the same stupid mistakes as old misogynist Larry but I think women have a perspective that has been ignored and in the case of Brooksley Born ridiculed. I have no doubt that if Brooksley’s warnings were heeded at the time, we would not be in this mess to the depth that we are today. Every new pronouncement from Tiny Tim and slinking Larry just makes me want to rend more of my garments in despair.And Barak Obama shows no sign of getting it. His latest appointee Gary Gensler to head Brooksley’s old job at the CFTC is insult upon injury. This guy was a protege of Senator Phill Gramm, Bob Rubin and Greenspan in the 90’s and is himself another Goldman Sachs partner. He is another horrible nominee from the same fraternity who destroyed the world. These people should be pilloried, ridiculed and in some cases indicted for the damage they have done and instead the have been offered positions as foxes in charge of the hen house.