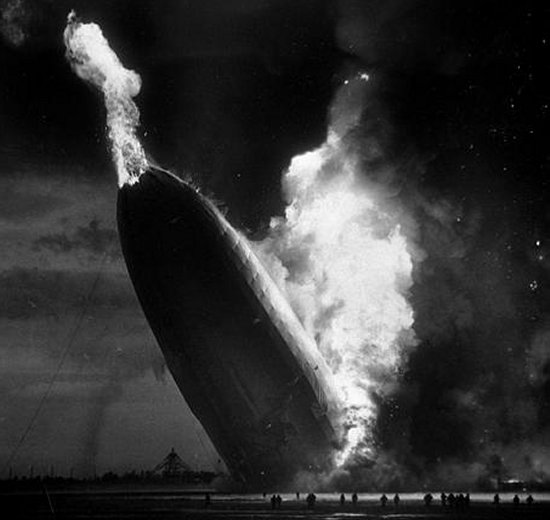 For those of you that are not familiar with the Hindenburg Omen, here it is. It is an tool used by stock market technicians from I assume the Hindenburg School to call for a stock market crash when the number of 52 Wk highs and lows exceed 2.2% of stock market volume coupled with a rising 10 wk average. I gather the omen has poked up it’s ugly snout from time to time lately. I leave it to the reader to decide on its validity. I have my own set of omens and they have been piling up like cord wood lately.
I try to be a big picture guy as the title of this blog suggests and prefer to look at trends beyond economics, politics and social change because we have a multiplicity of inputs influencing our civilization in a seemingly chaotic fashion. These inputs are subject to positive and negative feedback loops  and other known and unknown variables which can render short term prediction unreliable or impossible in a particular specialized  field like economics, but  I contend that it is possible to develop a big picture view which can inform how we can live and plan for this uncertain future. Over in Germany, the Bundeswehr has been hard at it working on  military contingency plans. Der Spiegel, an excellent German magazine obtained a leaked document with some interesting conclusions which wont surprise anyone with even a rudimentary understanding of the importance of oil to industrial economies. A link from theoildrum.com is here. I read the leaked report (not yet fully translated)and didn’t learn any new facts to alter my weltanschuung(sorry, couldn’t resist!), but I am pleased that there are think tanks in some governments that are in fact thinking.  We have people in the US  who have been sounding similar alarms to the Bundeswehr Think Tank but most have been outside the mainstream media and perhaps the Pentagon and DC think tanks just have better internal security. Similar documents may be out there and they just haven’t been leaked yet. The leaked document has a few key points which I have iterated many times in the past and I will do so again. The key emphasis of this blog is the importance of the influence of petroleum to an industrial economy. I have hit this time and again and here it is one more time. Oil doesn’t just influence our  industrial economy. Heretofore cheap Oil energy IS OUR ECONOMY, or  95% of our economy. Oil not only drives virtually all transportation of people and goods but provides the chemical base stocks for the various polymers and products of our globalized lifestyle. With cheap oil energy  already gone, it is pretty obvious that the cost to the entire world’s industrial lifestyle will be going up.The wealthy industrial nations will be able to hang on longer than the poor nations as long as the oil exporters continue to accept our dollars for their oil. The entire globalized world economy runs on oil and it is obvious to this observer that barring some new cheap oil energy substitute, the industrial economy of the past 250 years will soon be drawing to a close. The leaked Bundeswehr study spends a lot of time listing mitigating strategies to this petroleum decline.
As the cost of energy goes up, the possibility of growth in our industrial economy will go down. At some point the  ever rising cost of  energy will force contraction in economies, in effect negative growth.This will mean the end of the current globalized industrial model. It think it is also obvious that it means the end of our debt based industrial model. Debt is credit advanced based upon the promise of future growth. With growth you can pay back the principal of the loan and the interest. If you have growth you can also use leverage to increase your profits. Without growth a debt and credit based economy is dead. Without growth, leverage is dead as a wealth enhancing tool. Ditto fractional based lending, securitized mortgages, derivatives and all the rest of the toxic garbage proffered up by our bloated financial industry. The end of cheap energy spells the end of our debt and credit based industrial civilization. Not the end of civilization mind you. A new civilization will rise to replace the current now flawed energy profligate version. We are at such an inflection point and it behooves all of us to start thinking about the changes we will need to make to our lifestyle to adapt to this new succession.