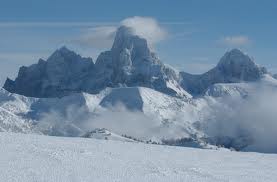 Yesterday I strapped on my snowshoes and decided to get high. We here in Jackson Hole have been the victim of deeply subzero inversions lately and the lower you are, the colder you are. The fastest way to warm up is to climb up, which has the additional benefit of getting into vastly clearer air. Normally my wife and I put on cross country skis but if you want to ascend steep snow covered slopes, you can’t beat snowshoes. So I took the opportunity to hike with a naturalist and a botanist, Andy and Amy, over on the West side of the Tetons across from a small ski area. The air above 8000 feet was bracing and clear with hoar ice crystals glimmering and wafting like fireflies off towering firs and spruces. The sky was a stunning cobalt blue, never so blue in summer which is the season we usually hike the Tetons. Not even a whisper of wind. We remarked on how effective the snow and trees were in snuffing out all sound except the occasional chirring of a squirrel or the chick-a-dee-dee-dee of that ubiquitous tiny black capped resident of the high mountains. Andy showed us pine marten tracks in the deep snow, an aspen tree clawed by bears and a huge downed tree where a bear had denned up for the long winter. The view from the top took in the distant Snake River Plain far below. It was for me a great escape from thinking about the ravages of energy extraction , environmental destruction and exploding urban populations. I had a lot to think about on the drive home which will be the subject of a future blog.

One thought on “Getting High”