An odd news blip on NPR caught my eye yesterday. It seems the mortgage side of GMAC halted all foreclosure processes in 23 states yesterday . As is usual with the now impotent NPR, no reason was given. A search of Bloomberg Business News revealed little more by way of explanation and explication. I brought it up with the neighborhood finance wizard and he offered the possibility that perhaps GMAC was halting foreclosures for fear of adding to an already bloated inventory and thereby further depressing prices. His explanation was of course plausible but I wondered if there could be another explanation. In the local Jackson Hole free newspaper this morning, Wells Fargo halted  the foreclosure of the Inn at Teton Village,a large hotel on the hook to Wells for $19+ Million. AS is usual in banking matters, no explanation was given.  I did turn up some worrisome tidbits.
It seems that JPM in Florida is a mortgage “servicer” operating under the MERS(mortgage electronic Registration System). Even though servicer sounds like a whore for the real estate banks, it’s really more like a pimp working for GMAC in Florida. As a pimp, the servicers job is to collect the monthly mortgage payment and deliver it to the holder of the mortgage, likely a MBS after taking out a cut for the service. So it seems JPM foreclosed on properties in Fla when in fact they did not  technically own,  and in fact never  had never owned . And here it gets worse. Neither JPM nor Wells Fargo had the legal right to foreclose but they did anyway because the borrowers who were living in the house without making mortgage payments had no reason to show up in court for the foreclosure. So let’s say the house gets foreclosed upon and later resold. Would Wells Fargo be liable if it conveyed a  bogus title?  Yves Smith of Naked Capitalism writes:
“In the event that the loan goes into foreclosure at a later date, the then-current owner of the loan files the foreclosure and sells the property to a new owner, often at auction. The land records would show a deed of transfer from the investment bank to the new owner. This creates a break in the chain of ownership of the mortgage rights. In many cases, the transfer of ownership of the mortgage loan has gone from the original lender, through several owners, and then to the foreclosing bank, none of which is recorded on the property title history. Technically, the foreclosing bank has no recorded title rights to foreclose in the first place…
There are reports that some title insurers are indicating that they will not insure for this title defect.
Yves here. Some readers may take this all to be unduly alarmist. But confirmation that this problem is real and potentially serious comes via a new “gotcha” practice by Wells Fargo on foreclosure sales. Wells is sufficiently concerned about the risks of selling properties out of foreclosure that it is springing an addendum on buyers, shortly before closing, which effectively shifts all risk for any title deficiency on to the buyer.
Now why is this a big deal? Go reread the boldfaced sentence above. If a bank like Wells does not have the right to foreclose, it cannot have clean title to the property. So the bank could conceivably be selling something it does not own.
Let’s say you buy a vase from a store. You open the box when you get home and find out the box is empty. You’d clearly be within your rights to get your money back.
With the Wells Fargo addendum, even if the bank has sold you the equivalent of an empty box, you have no recourse to Wells. Zero. Zip. Nada.”

What occurred to me is that GMAC  kerfuffle may in fact just be the tip of a finance iceberg in which most of the big mortgage banks have  criminally mishandled the mortgages they issued and foreclosed upon. If some or many of these foreclosed and bundled mortgages are bogus, the title companies wont touch them and the bundled mortgage backed securities which containing these mortgages which were already toxic may become untradable. If that becomes the case, the  already concealed losses of these bad banks could become  finally realized.  The TBTF banks of which Wells Fargo is one, are fraudulent overbearing rapacious corrupt giant squid continuing to dip their blood funnels into the heart of America as stated by Matt Taibi. They are  corrupt lying corporations  whose insolvency has been concealed by  our willing indebted politicians who are the water carriers of banks like Wells Fargo. The banks own our politicians and it is this chain of ownership that must somehow be broken. These corrupt banks can be fought by the people. The first and easiest way to battle them is to have absolutely nothing whatsoever to do with them. Close your bank accounts, your savings and CDs and walk, no Run. Our family recently moved to another local bank in Jackson. Anyone who is foreclosed by Wells or a servicer of Wells needs to at the very least contest the foreclosure. Demand that they provide proof of a clear title. The big corrupt TBTF banks need to be reined in and returned to their proper role as handlers and conveyors of financial transactions, just the way they were  in the days when  Glass-Steagall  was the law of the land. The giant Wall Street banks have destroyed the world economy and are continuing to claw at what is left in the periphery of the economy into their maw. None of these sociopaths have been punished, indicted or in any way reined in.  There are many parallels between our current predicament and what happened at the Estates General with Louis XVI and the Bourbons in France at the end of the 18th century. France was deeply in debt and there were attempts to increase public spending  to buy France out of debt. Taxes were assessed, and lest we forget, the Bastille was stormed, an event in which old Louis lost his head. I wonder if anyone in the administration reads history. As we have been told, those who don’t read about the mistakes in history will be condemned to repeat them. 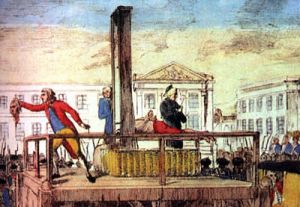