Narrative history of our Cal 48 KOHO

Continuing the tour aft you pass through a companionway door into the aft cabin. To stbd is the Nav station, to port is the aft head with another Lavac .  This head diverts waste to a holding tank or overboard by a valve.  I should mention that all the ancient gate valve sea cocks were replaced with marine  ball valve units with new marine hose with all new SS hose clamps. Aft of the head is a double berth. Aft of the Nav Station is a quarter berth traditionally the off watch berth of the skipper. The Nav station is the electronic heart of the boat with a large 12V breaker panel above and 110 V breakers below, well separated for safety.  A Prosine inverter/charger is mounted below. The boat was entirely rewired with tinned copper marine grade wiring with subpanels distributed throughout the boat facilitating troubleshooting of circuits. The original boat had only 2 110V outlets using non marine #14 gauge automobile quality wiring and outdated house breakers.  The 12V wiring was a few  old #14 and #16 gauge circuits with a mix of old breakers and fuses, poorly secured and difficult to access. Treadmaster covered steps allow access to the pilothouse/dodger area. The drop boards are ¾” teak or ¾” acrylic for good bombproof visibility!  The cockpit has a thick laminated glass dodger forward and vinyl windows port, starboard and aft. In warm weather the pilothouse curtains can be lifted and secured. The top of the pilothouse is Aluminum and it is well braced. There is an acrylic hatch in the roof to view the sails and the sides have fiddles to collect rainwater along with SS rails for outboard safety. I designed the pilothouse to be removable for truck transport and we have removed the house both times we trucked Koho across the country. It takes half a day to reassemble and re bolt the house. Both in the pilothouse and below are ample and sturdy grab SS grap rails replacing flimsy teak rails for security in a rolling seaway.  Some double as webbing attachment for deck gear such as the Inflatable. I replaced the low and flimsy factory stanchions and pulpits with thick wall 36″ high  316 SS stanchions using 316 ss sockets of my own design with fish netting for safety. Her aft factory cable quadrant steering was rebuilt with new cable, sprockets and bearings . At sea we rarely steered with anything other than the WH autopilot remote which was powerful, sensitive and accurate and allowed movement forward for enhanced visibility. Aft of the cockpit is the mizzen mast which does double duty as a mounting platform for the electronics. Both masts have steps to the top for facilitating rig inspection and maintenance chores. There is an Aires Windvane mounted on the stern which we used once to confirm it worked properly(which it did). We disconnected  the wind vane lines. It remains as a a backup in case the WH autopilot fails. It never has. I prefer to steer by a heading rather than by wind direction. The WH hydraulic/electric autopilot is the same design as what I had installed on my 80,000 lb commercial Halibut/Salmon troller where it never failed in the at times rough Gulf of Alaska. It performed flawlessly on the recent trip south from Alaska in May 2014, steering virtually the entire way.

The hull was   double epoxy sealed barrier coated  using the WEST System and Copperpoxy followed by conventional antifouling paint. When I purchased her she had a few small blisters despite a well done epoxy barrier coat by her previous owner in Florida. She has been blister free ever since despite spending  years in warm Mexican waters as well as  in SE Alaska. The spade rudder was removed and X-rayed to inspect the  internal steel framing for corrosion, None was found and additional epoxy fiberglass was added. The rudder tube was also epoxy/graphite lined and reinforced per WEST system recommendations to reduce friction. There is a Gore Tex bearing/seal the the top of the rudder housing which has never leaked.

KOHO was painted with Epoxy and top coated with Sterling 2 part LP in 2005. The hull has lost luster and the deck could use a fresh coat after 9 years of wear and tear. Belatedly I must mention that during this long expensive refit,

No boat is perfect and Koho by now after 4 years in the harsh Alaskan climate will need some cosmetic attention.  I removed the shower and water heater for our transpacific trip because her tankage is just 90 gallons.The cockpit  and below deck teak  may need re varnishing and there may be leaks in all the usual places boats can leak. The electronics were all functional when I left her but electronics age just like the rest of us. She will need a new set of batteries if abundant voyaging capacity is desired. She has 2 new deep cycle batteries installed for the trip south from Alaska in 2014. She has capacity below for 7-9  #27 or #31 batteries. This  Cal 48  is big and powerful  and  without modern labor saving aids like headsail furlers, she  can be a real handful in gale conditions and above.  Nevertheless we have sailed her  shorthanded on long  Pacific voyages with just hank on sails. I have extensive offshore experience on a variety of sail and power vessels and I can honestly say I have never sailed a boat as controllable , predictable, stable and comfortable as this Cal 48. Steve Dashew in his book the Offshore Handbook recommended the Cal 48 as an excelled example of classic plastic. But I digress… With the fully battened main and Hood furler, I could single hand her 10 years ago under mild to moderate conditions.  The good news is that her sleek hull is easily driven with only modest canvas..  This boat like most old  CCA racers is not a roomy beamy liveaboard apartment. She has no current shower and we removed the large water heater after it failed very early on. She was designed to go to distant  places fast. That she does. In spades. To my knowledge Koho is structurally sound and most of the expensive refitting and strengthening has been done. If I were to keep her I would purchase a headsail furler, because in gale conditions Koho is perfectly balanced under just mizzen and staysail w or w/o a reefed main.  I would install a new mainsheet traveler  as well.
We may be reached at our mailing address: Hugh Owens, PO Box 309, Wilson WY 83014 or through our web sites: Cal48koho.wordpress.com or cal48koho.blogspot.com or at cal48.com.  Our home phone is 307 203-2109. Call is 307 699-2254. I have additional pictures of the interior.  There are a few short sailing videos of Koho on the other links listed as well as some pics under sail and at anchor. 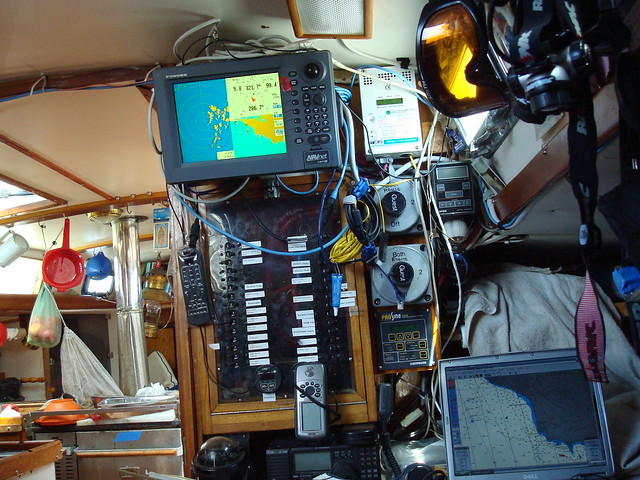